The Ziegenfelder Company (“Ziegenfelder”) announced it has been acquired by the Armstrong Group (“Armstrong”) in partnership with senior management. Selling under its’ Budget Saver™ brand, Ziegenfelder is the leading producer of Twin Pops in the United States. The Armstrong Group is a diverse, family-owned business that maintains unusually close ties to the communities they serve. This transaction is the successful culmination of an initiative led by Bigelow LLC. Headquartered in Wheeling, WV, Ziegenfelder (www.ziegenfelder.com), was founded in 1861 as a candy and ice cream maker and evolved into making the “Rainbow Array™” of frozen ice novelties. Lisa Allen, former CEO & majority owner, took over the company in 2003 from her father, Charles Lando. Allen and her seasoned leadership team guided the company through growth that expanded across the nation. Today, Ziegenfelder produces nearly 3 million pops daily between manufacturing facilities in Wheeling; Denver, CO, and Chino, CA. Budget Saver™ is represented in nearly every major retailer in the United States and the Assorted Twin Pop product has grown to become the number #1 selling frozen novelty in the nation.

Kevin Heller will remain CEO and all other senior leadership will stay with the company. Along with the growth, Ziegenfelder created a work culture that is deeply rooted. The company represents a "Think tribe first" mentality that flows into every aspect of their operations. Leading the charge in culture, was Barry Allen, former President, Chief People Officer & Owner, who commented, “We have succeeded because our tight knit team has produced and sold our product that looks good, tastes good and doesn’t cost a lot. We are extremely proud that in 2021, Ziegenfelder was recognized as A Great Place to Work.”

“We are so proud of what the Ziegenfelder team has accomplished over the past thirty years. Our business is once again facing exciting growth opportunities and our leadership team is ready to step in and continue driving that growth. We felt that partnering with Armstrong was a perfect match. They are privately-owned and operated like us, they get our culture, and they have a history of supporting growing businesses effectively.” Lisa Allen, Chairman of the Board & Owner The Ziegenfelder Company

Headquartered in Butler, PA, the Armstrong Group, (www.agoc.com) is a family owned and operated collection of diverse companies. What began in 1946 as Armstrong County Line Construction, founded by Jud L. Sedwick in Kittanning, PA, has now grown into an organization that encompasses multiple industries and employs over 2,000 individuals nationwide. Armstrong was selected for the acquisition because they closely mirror the business philosophy and culture of Ziegenfelder. The acquisition expands and strengthens the Armstrong Group portfolio, adding to operating companies that include interests in broadband, video, telephone, security, real estate, electronic manufacturing, HVAC, and now, frozen treat manufacturing.

“We are excited to add a company with the rich heritage of Ziegenfelder. Their family centric approach matches well with our culture. Their product offerings are highly regarded in the frozen novelty space, providing great taste at a great value.” Dru Sedwick, President & Chief Executive Officer Armstrong Group

Originally established in 1935, Bigelow LLC is widely known as the M+A Advisory Boutique that deals exclusively with private Entrepreneur Owner-Managers. Bigelow has a reputation for having a unique understanding of the special requirements of the owner-managed, entrepreneurial operating company in building and ultimately capturing Enterprise Value.

has been acquired by 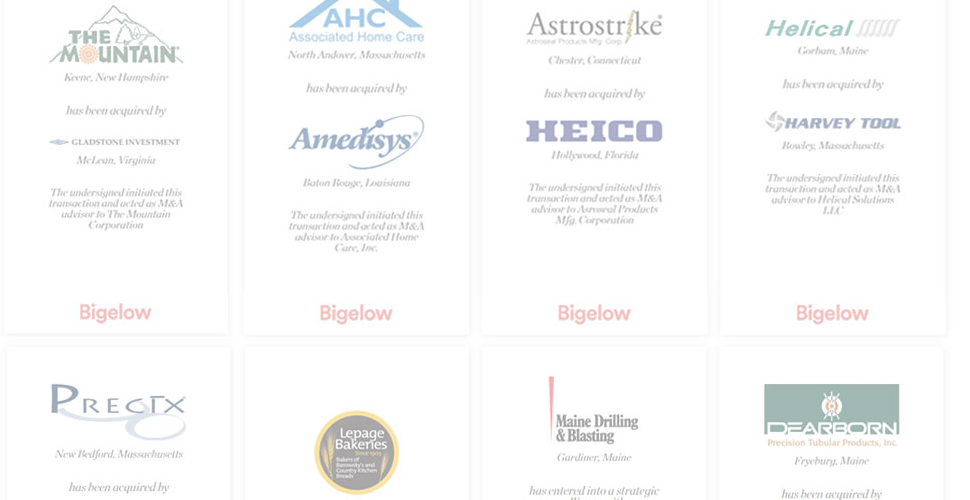